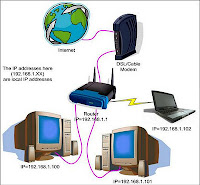 A router is a device that forwards data packets between computer networks, creating an overlay internetwork. A router is connected to two or more data lines from different networks.
When data comes in on one of the lines, the router reads the address information in the packet to determine its ultimate destination. Then, using information in its routing table or routing policy, it directs the packet to the next network on its journey. Routers perform the "traffic directing" functions on the Internet. A data packet is typically forwarded from one router to another through the networks that constitute the internetwork until it gets to its destination node.
The most familiar type of routers are home and small office routers that simply pass data, such as web pages and email, between the home computers and the owner's cable or DSL modem, which connects to the Internet (ISP). However more sophisticated routers range from enterprise routers, which connect large business or ISP networks up to the powerful core routers that forward data at high speed along the optical fiber lines of the Internet backbone.
source: en.wikipedia.org

Notification
This is just an example, you can fill it later with your own note.
Done